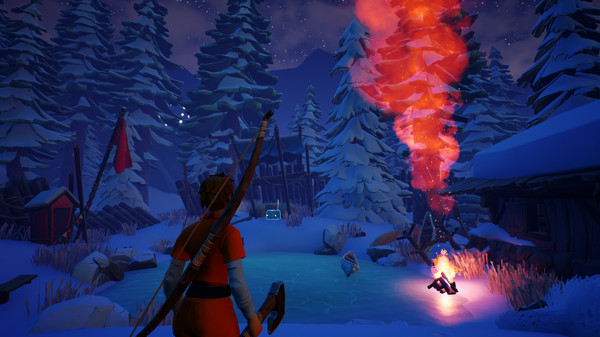 From creators Scavengers Studio comes the newest game to join the battle royale genre: Darwin Project.  However, I wouldn’t compare them to other battle royales yet, as Darwin Project brings some very unique mechanics to the game that really make it stand out.

Darwin Project is a 10 player battle royale game currently in Early Access and available on Steam where you can purchase it for $14.99.  When asked Why Early Access? the studio says:

“We’re not making just any battle royale game; we’re building fresh features like the Show Director who serves as a master of ceremonies, Spectator Interactions that let viewers directly interact with streams, and we’re tightening up the whole experience with an emphasis on tracking that ensures players are always within arm’s reach of a tense confrontation.”

Darwin Project takes place in a “dystopian post-apocalyptic landscape in the Northern Canadian Rockies.  As preparation for an impending Ice Age, a new project, half science experiment half live-entertainment, is launched. It’s called “Darwin Project” and it challenges 10 participants to survive the cold and fight to the death in a treacherous arena.”

In every game, one player is dubbed the Show Director.  This player acts as the director of the game where they can spectate every player, speak to them over the microphone, give them items and heals, and spawn/update the new zones.  Often times a Show Director will give good advice, possibly warning you of an attack or reminding you to run.  But not always, as we witnessed Show Directors attempt to scare and trick players; keeping them on their toes.

The Show Director “controls the arena with nuclear bombs, zone closures, gravity storms, and the power of their voice.”

The Show Director can also be influenced by Twitch chat, where integration will allow for Twitch users to type in chat to vote on things like what type of items and zones to add, as well as being able to cast votes for who they think will win the match.  As games gather more and more attention on streaming platforms like Twitch, adding the possibility to engage with chat should really help this game take off.  Why just watch your favorite streamer when you can have an influence on the match?  Vote for your streamer to get a heal to save their life- I’m sure they’d appreciate it.

Electronics are like air-drops in other battle royales.   They’re intended to lure players into a bloodbath as contestants fight for electronic reward.  What does a electronic do? For the lucky winner who loots the electronic, they’ll be able to choose and craft a permanent ability that they can use for the rest of the game. Some abilities you can craft are camouflage, invincibility, and even flame-arrow-firing turrets.

Because you’re in the snow, you’re constantly leaving behind tracks and footprints that other players can use to follow and find you.   Clearly the vision of the game is to be faster paced and to get rid of the annoying down time you find in other battle royales like PUBG and Fortnite.  You know, after you land, loot, and have to run the entire map to the new circle and you never see another player?

Not in this game. Track your enemies while you’re breaking tracked. Craft traps that can help you, and check for maps within buildings that will show you enemy positions.  Its blatant that the developers want these to be action-packed.  You can also craft items and armor to help stay warm as the cold will slowly freeze you.  Drinking items like Coffee can help counter the cold.  The cold zone closes in and will freeze you to death.

Check out the community highlights

Fighting mechanics in this game involve snowballs, an axe, a bow (with limited arrows) and some other abilities and items you can achieve from getting electronics.  Players will often use their axe to knock back enemies, and will line up a bow shot while they are at a distance.  Use tracking arrows to keep your enemies visible, and don’t forget to pick your arrows up from the ground after you use them, or after your enemies miss shots.   You can loot dead players bodies as well, but be warned there is a cast time.

Want arrows? Harvest some trees and craft.  Getting cold? Get some trees and craft a fire.  Stay warmer by crafting some fur armor.  Hunt and harvest deer for more crafting materials as well.  What battle royale incorporates harvesting/hunting other NPCs? Besides old, old H1Z1 which had zombies, of course.

I’d say so.  Its a 10 man battle royale- not 100 players like PUBG and Fortnite, so games are quick and not so obnoxious to lose. Jump in and let us know what you think.